“…the most beautiful human obsession.”

According to Daniel Levitin’s This is Your Brain on Music, it’s, well, music. If you’re reading this blog, you’re aware that I agree with Levitin, if for no other reason than it justifies my own obsession. 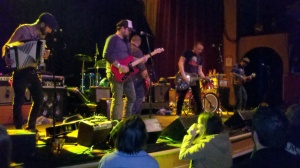 I know I should be promoting the release of Bee Candy right now, and I’ll get to it later this week. However, this past weekend I saw six Denver based bands– Tin Horn Prayer, Drag the River, and Slim Cessna’s Auto Club at the Bluebird; Falstaff, Synthetic Elements, and Reno Divorce at Scruffy Murphy’s; and  I did not pay nearly enough to balance out the pleasure I experienced.

Denver has a rich music scene, and the more people attending, the more bands we can support.  So while I have your attention, I wanted to take this opportunity to convince you to  get off your ass and go to a show.

According to Levitin, “Concert goers talk about a special state of consciousness, a sense of thrills and excitement, when the music is really loud– over 115 dB…[it] saturates the auditory system causing neurons to fire at their maximum rate.”

This feeling goes beyond the polish of Drag the River or the passion of Reno Divorce. It’s hot as hell when Tin Horn Prayer runs off the rails at full speed. Falstaff has so much fun  playing that the crowd can’t help but catch the mood.  Slim and Munly construct a dementascape of Americana that turns us all into wittnessing believers, and well, you’d have to be missing a part of your soul to not enjoy the  show put on by Synthetic Elements.

If you don’t listen to anything except the music you listened to in high school, it’s time to see what else is out there. If you “discover” music listening to the six bands played over and over on the Clear Channel radio station of your “choice,” it’s time to break those  corporate  chains; homogenization is for milk (maybe) not music. If you’ve only been to concerts in giant arenas, you are paying too damn much for too damn little.

And finally, if you don’t understand why anyone would go see music live when they can get a “better” version on CD (yes, Ken this last is for you):

If you’ve never heard music live, you’ve never heard music; you’ve heard a recorded representation. Don’t get me wrong. I love recorded music. Some of my favorite people are sound engineers. But if you are not there in that swirling dynamic moment in which a song is created–not just by the musicians on the stage but by the energy in the room bouncing back and forth between the crowd and the band– then your experience is only an abstraction.

It’s the difference between reading about love and falling in love yourself.

You want someone to hold your hand, I’ll be at Three Kings this Saturday, checking out Land Lines, and at same place the following week for Tin Horn Prayer & Nathan Maxwell. 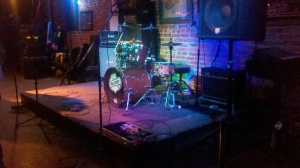