Posted on September 4, 2010 by shullamuth

” The impermanence of live performance is such a great thing. It’s burned into your memory. You try to pick out every detail of what was going on and you just can’t, which is what makes it beautiful .”

” My pipes are Sheffield S8s. I play Susato penny whistles. I have a Korg X3 I’ve played  since I was 15. It’s not the newest technology, but it sounds good. I play a Hammond organ.

“My guitar, the white one, is a Paul Reed Smith. It’s a discontinued studio model that’s actually my grandfather’s guitar. I also play Fender Telecasters. Over there, I have the SG; Byrd has one like it. We bought them on the same day unbeknownst to each other.   I have a Radial Hot British tube distortion pedal, and a Moogerfooger analog delay pedal; I also use an EBow.”

When you struggle to learn or write a song, what gets you through?

“The end result–playing it live…the first time you play it, it’s going to be oh-shit-oh-dear, but then it gets better.” 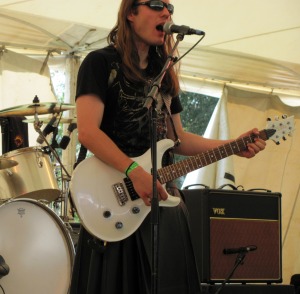 “The impermanence of live performance is such a great thing. It’s burned into your memory. You try to pick out every detail of what was going on and you just can’t, which is what makes it beautiful . The bittersweet aspect of: I had that, and I’ll never have it back.”

Where do you prefer to play, bars or festivals?

“There are things I like about each. The best thing about a festival is the diversity of the crowd. You have everybody–families and little kids. What I like about bars is that you feel a lot more connected to the crowd.” 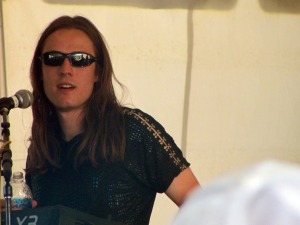 At the Irish Festival there was a really good connection, I thought, with the crowd, but generally, bars are a bit more intimate. It can rock harder; it certainly goes on longer. You get to do what you do.  I really like to play the Little Bear, Lonigans. Nice long nights, we get to play what everyone wants and don’t have to watch the clock.”

Who do you listen to?

“I remember  as a little kid is listening to the Beatles and Pink Floyd. Elvis, CCR, ZZ Top, Steppenwolf, the Doors, the Stones…but that was also tempered with classical music. We’d listen to Vivaldi (the Four Seasons), Dvorak, Beethoven, and Mozart.

“Then, second or third grade, I became obsessed with the early Chris Isaak records and that retro sixties vibe. I’m pretty sure that was the point that I decided I wanted to play music. I got into Tom Petty, and that had a gigantic influence on me. Later, I started to get into guitar players: Jimi Hendrix, Stevie Ray Vaughan, Van Halen, Kenny Wayne Shepherd, Johnny Lang, Santana, and of course David Gilmour of Pink Floyd. I also started listening to Bob Dylan [and] Zeppelin.”

“I saw Seven Nations for the first time when I was fifteen and had just started learning the bagpipes, and I was like holy shit, I didn’t know you could do that with a bagpipe. It gave me a whole new perspective.

“I was more into the fusion of Celtic music than straightforward traditional–Afro Celt Soundsystem, Loreena McKennit.

“The later years of high school I heard of a band called Kula Shaker, a Brit rock group, and bought the album ‘Peasants, Pigs, and Astronauts’ on a whim. I was blown away. It was modern, of course, but also like all of my favorite bands rolled into one: Beatles, Floyd, all these influences, not retro at all, but a thick rich sound.

“I got into David Bowie, whom I admire for many reasons, but certainly because he refuses to be pigeonholed.

“Other artists who I am fascinated by include Bjork, Shpongle, Muse, Mars Volta, The Flaming Lips, Bad Religion, AFI, A Perfect Circle, White Stripes…[Now] it’s kind of a question of who I don’t listen to. I have a very diverse aesthetic.”

What is it about those timeless bands—Floyd, Zeppelin, Hendrix, that keeps people coming back?

“It’s the starting place. Where did it begin? Right there: Led Zeppelin, Jimi Hendrix, Pink Floyd.  Listen to Led Zeppelin I and II. It redefines the blues genre and the rock genre simultaneously. Some people will say that the birth of metal is Zeppelin and Black Sabbath. There’s something really primal about it. It gets you. Balls out rock.

“Dark Side of the Moon, if that album came out this year…it has that 70’s vibe to it, [but] sonically, it’s timeless. Same with Abbey Road.

Where do you want to go as a musician?

“That’s a tough call. If my situation were different, maybe it wouldn’t be such a bad thing to tour around for 45 weeks out of the year, but—I  don’t wanna  sound harsh—I  don’t wanna end up like Seven Nations. I saw them at the Irish Festival, they looked tired. A bit tired musically as well, maybe, but I’m not sure that’s their fault.

It would be hard to keep growing as an artist if you’re being pressured not to mess too much with your style. This is something I’m struggling with too — although I want to push the boundaries– I feel like I need to be loyal to those who’ve helped us get to where we are now. It’s a difficult thing to reconcile.

“I think it would be great to have the opportunity to play shows all over the country and all over the world. I think that would be fantastic, but I’d like to do it on my own terms.”

“I don’t want to be separated from my family, so I’d have to be making enough to make that feasible. I’d also like to be involved in the production end of things…working in the studio… I’d love to be able to just do music. Make music and art. Play live when we want to and when it’s worth it.”

Do you want your son to have a life similar to the one that you’ve had?

“There might be a few things I would wish for him to be slightly different, but if that’s what he wants then yeah, he should go for it… I’ll play in his band.” 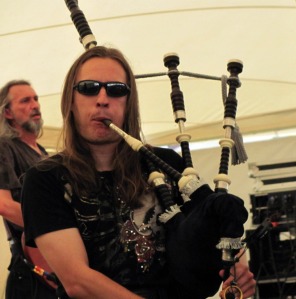