“…this is the story of what it means to make a recording of music—a representation of music—and declare it to be music itself.” Greg Milner, Perfecting Sound Forever: An Aural History of Recorded Music

Disclaimer: If you came only to hear about Angus Mohr, skip the first six paragraphs as they are the self-indulgent omphalos gazings of the author (which she swore she wouldn’t do, but did anyway).

According to Milner, “…music represents the way we want to see the world and ourselves…” but what about when that willful seeing, that perception, fucks with you? Last Thursday, when an appointment canceled giving me some time to kill before Angus Mohr’s rehearsal, I drove past the house my grandparents bought in the 60’s, where they raised my mom, her brothers and sister, where they yelled at my cousin Larry Jon and me for hanging on the clothesline, and where I hadn’t been back to since my mom moved out of Globeville after Grandma died.

I’d been afraid that Grandma’s roses would be dead, devoured by skeletal absence. Instead, they cascaded in yellow, pink, and green over the porch and dripped onto the lawn. In the pre-storm light, the house looked hidden and satisfied, returned to itself after forty years of our drama.

Heading back up Washington St, eschewing the highway because I was still killing time, my eyes,– which are usually drawn up the hill by Roger’s Fireworks, Bomarito’s, and the Butcher Block Café— slipped sideways, flicking through the sea of spring and summer flax, bindweed, and thistle, climbing the hill that I had stopped seeing somewhere around the age of ten, to a long, low, sheet-metal building, splattered with rust.

At ten, I assumed it was an old mill. As an adult, I knew that Asarco took up that relative space on a map because I’d studied it after my Aunt Johnna, Grandma Betty, and Uncle John, all died from cancer within five years of Asarco digging up and replacing twelve inches of Globeville’s contaminated top-soil.

However, before that moment last week, looking at the grey building and its attendant smoke stack silhouetted against the bruised watercolor sky, I’d never connected the two images to realize that I was looking at Asarco’s Globe Smelter,  the magnet that had drawn immigrants from Europe and Mexico, that had named the neighborhood Globeville, that had, for seventy years, spewed arsenic and cadmium into  the mouths and homes of its neighbors, though without—according to their data—any ill effects.

All of which is the long way to say that perception doesn’t just blind us to the small and unnecessary, and music isn’t just a magic mirror. A lyric’s image, a note’s reinterpretation of a theme, can freshen our senses, peeling back perception’s tyranny and returning us to the experiences that have shaped and reshaped who we are.

Even more than that, when we focus our attention, make perception our bitch, forced to do the bidding of our thirsting minds, we discover that the representational world becomes itself an experience, life instead of its symbol. Like the fourth arm in Pythagoras’ spiral,  it transcends knowledge’s safe prison walls by making room for that formless space of risk and imagination.

I now return you to your regularly scheduled Angus: 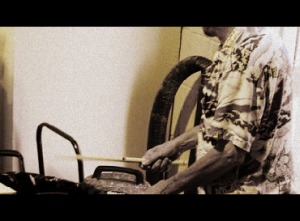 The quick impromptu folk song, with some humorous lyrical substitutions, energizes the pre-rehearsal milieu. Though Paul, Byrd, and Steve have been playing together for close to thirty years– minus some breaks for what Paul refers to as, “The stuff songs are made of”—and Matt joined the band more than ten years ago, Angus Mohr doesn’t want to be one of those acts handing their crowd the same show year after year.

“That’s why we have a thousand tunes to remember.” Steve rumbles from behind the mutt kit, “I don’t think I’m exaggerating by much.”

“Only five hundred or so.” Paul grins.

There’s some desultory talk about how monitor connections could be improved. The science fiction solution of wiring it directly to the brain is gaining preeminence when Matt says, “Alright, I’ll stop making whale noises with my guitar now.” Only then do I notice, by its absence, the sweet weeping sound that had been there a moment before.

They start, like last Thursday, with “Thousands are Sailing.”

Milner, explains the mechanics of sound as an air disturbance, where a, “…particle  is knocked off its unique and stable position in the universe…swings forward, and then is pulled back by its spring…and attempts to find its original spot.” Listening to the “…Sailing” lyrics,  Milner’s explanation strikes me as a pretty good metaphor for what life does to us.

Sometimes we find our spot; sometimes it’s no longer there for us to return to.

Next they fly through, “Sympathy for the Devil,” injecting it with intensity that can be perceived but only described as, “Hells ya.”

The last whoo whooo dying out, Matt says, “I think I chipped a tooth on that one.”

Paul says, “One of the reasons I enjoyed it so much is I tried to turn it down and it went the other way. Up instead. Then we were in it and I couldn’t stop.” 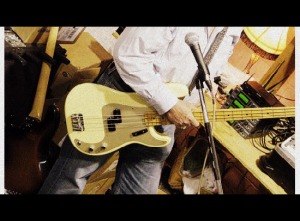 Paul didn’t just mean the song, but rather a more elusive “it” that had been missing the night before, when nothing seemed to go right.  Missed cues, missed notes, forgotten lyrics, their usual repartee reduced to forced jokes about how rough it was going.

“Gimme Shelter,” melts into “Sorrow’s” 6/4 time and Milner has me imagining a mosh-pit of energy fed electrons ripping it up inside the microphone heads.

At the end, Steve says, “I find with a song like that–I start getting tired– just play harder.”

“Paladin,” Paul offers a mnemonic for the title’s correct pronunciation, “The ancient ancestor to Paula Deen, the barbecue queen.”

And Steve finishes with, “Twice.”

Steve: “The captain has jumped ship.”

All eyes turn to Matt, and there’s the sense that this is his song and not just because he sings lead vocals, plays guitar, and then switches to pipes—all in two and a half minutes.

Matt, who had been tuning his chanter says, “Can we see if I’m closer,”  a few experimental notes later he nods, “That was sharp , but that’s ok; I can deal with that.” Still, he makes a few more adjustments before deciding, “That’s a lot closer.”

Matt trades out his pipes for guitar and Steve says, “Boogie till you puke; make it scream.”

Two and a half minutes later Paul smiles, “I don’t think we want that one any better; it had just the right raw edge.”

That raw edge drives me back to the rehearsal the night before, toward the end of it, when Steve picked up the mallets to hammer out “Barbary Coast’s” tribal beat. That song had seized a moment that hadn’t materialized earlier in the night, sweetened by the struggles that had come just before it.

I’d walked out of that practice thinking about the two paradoxical definitions of perfection: flawlessness and wholeness.   I appreciate the craftsmanship that reaches for flawlessness, but perfection divorced from of the reality of work it took to get there–work that is part of the whole, but not flawless—seems both arbitrary and missing the point.

Byrd pulls me out of my thoughts with the slide drawing down “Comfortably Numb’s” un-earthly chords, but I’m still stuck on this idea about wholeness, and I start looking for the edges of the song, that place where it separates from my sense memory. I re-trace my mental steps over nights at Herman’s and Scruffy’s, trip over The Wall Live in Berlin, summer nights and escaping into my car’s pocket freedom, falling down to a Christmas somewhere around the age of fourteen, laying next to a boy, our arms barely touching, listening to the slow predatory nightmare pouring out of his speakers.

All of that, wrapped up in seven minutes of accreted density, closing out the last rehearsal before the Rhythms show. When they play it Saturday night, there will be another layer, a little more weight, tied to that moment, listening, remembering, and to this moment, writing about it.