Framed by painted cinderblock walls, long rectangles of soundproofing, amplifiers, and toolboxes– Byrd, Steve, Matt, and Paul face each other across the square of their practice space. A ladies’-leg lamp, a six inch skeleton playing a five inch drums, and an enormous red Halloween mask — the eponymous mascot for Ricky Fire and the Red Hot Voodoo Devils, Angus Mohr’s prior incarnation—all contribute to the aesthetics.

“We need to play. If you only play once a week you get sloppy. We’ve been told that no one notices it but us. But we really notice it.”

“It’s better to play, even if you’re playing at home.”

“There is such a thing as rehearsing too much, but we’re not there yet.”

“Seven would be too much.  Six would be ok. Five would be perfect.”

“If our only jobs were music.”

Speaking of jobs, Paul says, “I talked to a guy today who does sound and light installation. I said, have you ever heard of a place called Rhythms? He said I’m hanging lights there now. How’d you hear about it? I said we’re playing there a week from Saturday night.”

Getting ready and in between songs, Steve and Paul banter over the mics; Matt makes comments amid instrument changes and adjustments, and though Byrd chimes in occasionally, his real voice comes out of his hands, restlessly pressing  the frets of his guitar, trying out a riff or sending something sweet and nameless drifting over the monitors. They also tend to finish each other’s trains of thought, a seamless blending of ideas, making it impossible to tag their quotations. 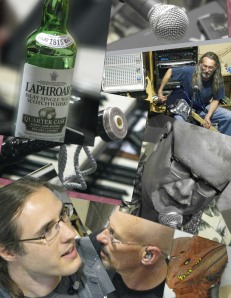 When they’re playing, a different conversation takes place. In addition to the notes, there are nods, shrugs, and smiles. With two shows coming up a week apart, Rhythms June 19th, and the Cheyenne Musical Arts Festival on the 26th, they have a lot to talk about.

Starting with the set list. On their CDs, the general rule is one third new original material, a third traditional, and a third just-‘cause-we-want-to, but for shows, they also have to consider the venue.

“In Cheyenne, we’ll be playing a lot of bagpipe Scottish and Irish stuff that people will feel fulfilled to hear, but we’ll also do a lot more original stuff that we haven’t done in a while.”

“We’ve got song lists for the last five years.”

“We try to guess right about what people will say.”

“Although we’ve been fooled a few times.”

And with that they launch into Thousands are Sailing, a poignant song about exodus and exile.

Byrd says, “I hit a couple of clams.”

“Sometimes, we’ll only play four songs in one rehearsal.”

Steve explains the difference between blunders, errors, and clams: If you sing where there should be chorus it’s a blunder. An error is always there and just needs to be controlled.  A clam is the wrong note.

“Less is more. If you can throw out a chord you’ve been playing for a year, and it’s better because of it, that’s a relative clam.”

“I guess there’s a fourth kind that has no name.”

“Clams of the fourth  kind,” floats over the monitor in an appropriately Spielberg tone.

Steve says, “It’s when you go for a fill or a lick and it’s tasteless and cornball. It fits mathematically, but it’s not musical as we know it.

“If you make a mistake that’s relative you repeat it.”

“If you do it three times then it’s a concept.”